Bucket racers rally Auckland Council: "We don't have anywhere else to race"

Aotea Square was swarmed by disgruntled members of the bucket racing community Monday morning as they attempted to catch the attention of the Auckland Council.

Multiple racers took their bikes to the Auckland CBD to race around a makeshift track and try to raise awareness of the closure of KartSport Mt Wellington.

"We don't have anywhere else to race in Auckland now," head of the Bucket Racing committee, Liam Venter, said.

"We weren't there to upset anyone and safety was paramount for us, we didn't want anyone to get hurt."

Venter told the Herald they hoped the protest would help them in their communications with the Auckland Council.

KartSport Mt Wellington will shut its doors on October 12, leaving about 150 motorcycle members in the lurch with nowhere to race.

The Auckland Motorcycle Club - also known as the Bucket Racers - has hired the Mt Wellington track from KartSport to race every weekend for more than 30 years.

Venter said landlord Panuku Development Auckland planned to lease the sporting site to a container company for storage at a much higher rate. 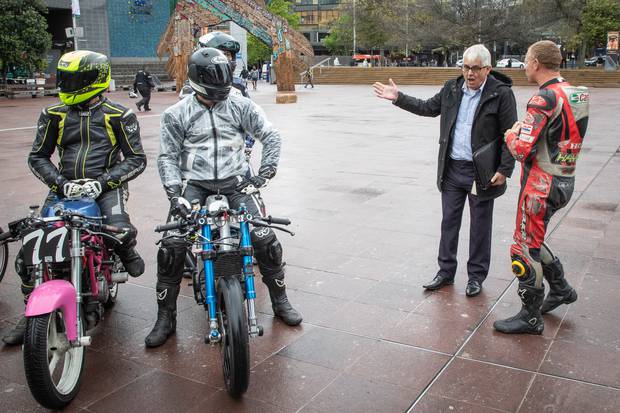 "This was initially on a three-year term and was never a long-term arrangement.

"Since the lease expired in 2012, Auckland Council has been in ongoing conversations with KartSport Mt Wellington about their relocation to Colin Dale Park, with the club indicating it would move out by the end of 2017," he said.

Venter said it was likely Bucket Racing would cease to exist without a track to race on and the move to Colin Dale Park wasn't a certainty.

The biggest issue was that there was only one other track in Auckland but they couldn't use it because of resource consent issues, he said.

"If a swimming pool got shut down, members would just go to a different pool but if it was the last pool there would be an uproar - that's what's happening to us."

The Bucket Racers weren't the only club affected - the University of Auckland Formula SAE Team used the facility regularly, along with the Mt Wellington Roller Club.

Venter said the track was an iconic breeding ground for top New Zealand racers such as Scott Dixon, Mitch Evans and Nick Cassidy