A Northern Washington DC woman has been arrested and charged with assault with a dangerous weapon after smashing the windows of a Greyhound bus in a road rage incident.

In a video captured by an eyewitness, Mariana Silver, 20, can be seen outside of her vehicle shouting to other commuters in the center of carriageways before proceeding to run over the man who was trying to stop her from driving off.

It begins with the enraged woman cracking the windows and side view mirror of the larger vehicle on the driver's side, before placing what appeared to be the car jack she used to break the glass back into her trunk.

The incident took place around 6pm and happened after the Audi made an illegal pass in front of the passenger vehicle heading from Pittsburg and in the direction of the 1800 block of Bladensburg Road.

People inside the bus can be heard commenting in disbelief, the MailOnline reported.

"She's going to f***ing jail," one woman says. While others ask the woman why she is reacting in this way, asking her to calm down, to which she responds: "He f***ed up my whole car."

In the next shot it's apparent the front windshield had been broken earlier. 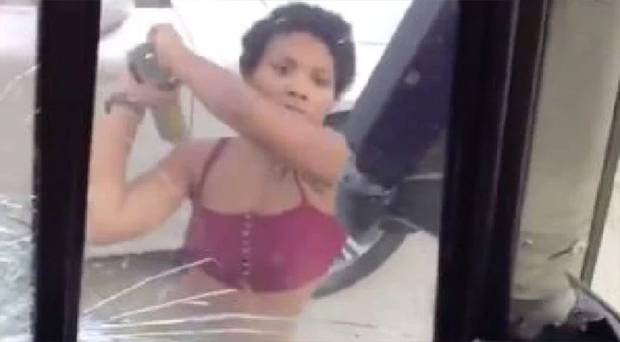 The woman then threw the item back into her trunk before trying to get away in her Audi. Photo / Twitter

The midriff-bearing woman then gets into her car and runs the gray-haired man over not once but three times, after he persistently obstructs her driving path.

"You're a crazy driver. You need to get off the road," the man had told her according to a police report.

A man filming the video, Juan Blanco, can be heard trying to reason with her: "What are you doing? This is an old man."

While others warn the man recording not to put his hands on the woman who had tried to drag the older man off her car, he can later be heard confirming he has it all recorded on video.

"She just started pounding like she wanted to get inside the bus," he told WUSA9 about the moment that was captured two minutes after the altercation began. "And everybody was really scared. Most of the people on the bus were elderly." 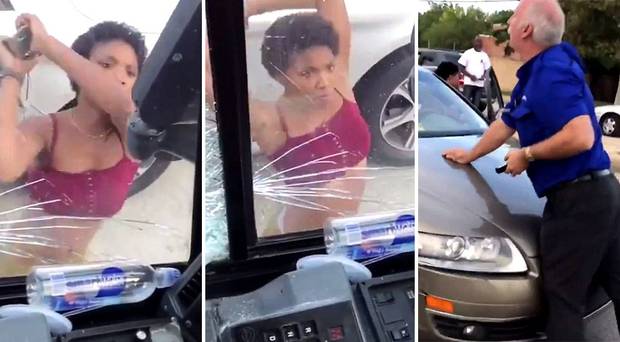 Police have arrested a woman who smashed the windows of a stopped bus involved in a road rage incident on Thursday. Photo / Twitter

Onlookers can be heard screaming, "Why would you jump in front of a car like that?"

Even after being run over twice the man glued himself the vehicle before being bumped off a third times after traveling quite a way down the road.

The man remained on the phone – presumably to report the incident – the whole time.

He responds: "She was gonna get away with it," to the people who helped him up and out of harm's way.

Ethan Kane shared the unbelievable clip captured 13 hours prior on Twitter Friday morning, much to the disbelief of social media users.

"Mannnn, what's going on DC?! She really had no more f***s to give lmao," he captioned the clip. 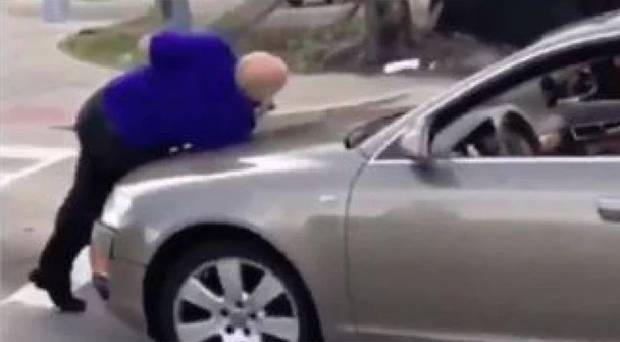 Witnesses desperately tried to get the man to move away from the woman's car and into safety. Photo / Twitter

Many suggested the man refused to let the woman get away so he could claim money in damages.

The man appeared to okay after the bump and indeed be seen smiling after the woman speed off down the road.

While he was left with bruises and scratches on his left elbow after the fall and is reported to have pain in his left hip.

Greyhound said in a statement before her arrest: "The driver was able to complete the route by transporting customers to their scheduled stop at Union Station.

"Our standard protocol includes an interview with drivers following any incident, and we will continue cooperating with law enforcement on this matter as it is still under investigation. For additional information, please contact local authorities."