Fuel companies have hit back at Prime Minister Jacinda Ardern, blaming the Government's own taxes as a reason motorists might be feeling "fleeced" at the petrol pumps.

Ardern yesterday launched a scathing attack on fuel companies, saying she thinks "consumers are being fleeced" at the petrol pump.

"I am hugely disappointed in the level of price that consumers are currently paying at the pump for fuel," she said at her weekly post-Cabinet press conference on Monday.

And this morning, she doubled down, telling MediaWorks that prices had increased 39 cents a litre in a year - but only six cents could be attributed to excise. Oil firms, she said, were most definitely "profiteering".

But one of the biggest fuel companies operating in New Zealand has pointed the finger right back at the Government, blaming — in part — the Auckland regional fuel tax and the increase in the national fuel excise for the higher petrol prices.

Given the concerns about "anti-competitive behaviour" in the fuel market, Ardern has prioritised the passing of the Commerce Amendment Bill.

Read more: As you pay record GST at the pump, AA says "get rid of the tax on a tax"

This would give the Commerce Commission the power to conduct market studies into fuel markets to better understand how the market is functioning.

Ardern said the legislation was likely to pass in two weeks.

"[Petrol companies] haven't opened up their books to us in the past; so we're going to have to force their hand."

BP welcomed this announcement, with managing director Debi Boffa saying the Commerce Commission's independence would provide greater assurance to the New Zealand public and to Government that Kiwis were paying a fair price for fuel. She said BP reviewed prices daily to ensure they were as competitive as possible.

"There are a number of factors that influence the price of fuel, some of which are not within our control, including cost of product, the exchange rate, and taxes and levies."

Boffa said recent price changes had been influenced by increases to the cost of product and the weakening NZ dollar.

"In addition to this, the Government recently introduced the Auckland regional fuel tax plus increased the national fuel excise by 3.5 cents per litre [plus GST], impacting the price of fuel for motorists in Auckland and across the country."

Z Energy chief executive Mike Bennetts said he was pleased to hear the Government would expedite the passing of legislation, but disagreed that fuel companies were "fleecing" Kiwi consumers.

"Z disputes that prices are unjustifiably high, and while margins have increased from an unsustainable level in 2008 which saw fuel majors exit New Zealand, it has not increased at the level suggested."

The fuel market was highly competitive, Bennetts said, adding that Z would release its half-year financials in early November.

"We look forward to sharing an audited, accurate view of our profits with the public then."

Gull and Mobil did not respond to requests for comment.

Steve Meharry says he's lucky to work in Auckland's CBD, enabling him to take public transport to and from work.

However, for someone who jumps behind the steering wheel each day, the mounting petrol taxes are maddening.

"I'm a little bit frustrated that basically we were promised no taxes and basically we get this excise tax coming in which is actually a tax," he told the Herald.

"On top of that we've obviously got petrol prices rising. I know they move up and down depending on the global economy but it doesn't help, it's only going to get worse."

Meharry lives on the North Shore and takes the bus into the CBD each day for work.

At his old job, he would occasionally drive to work but now working in the city, the good public transport links mean he doesn't have to. 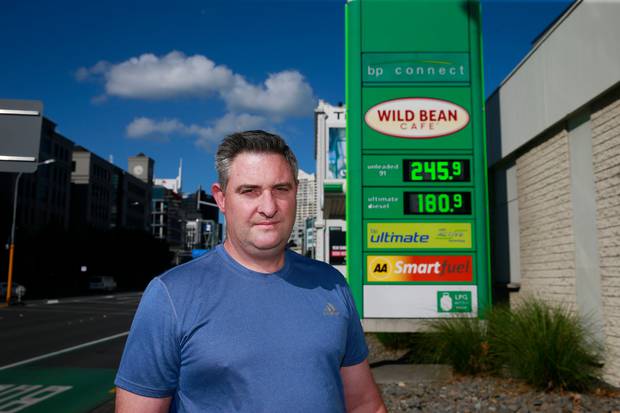 Steve Meharry lives on the North Shore and takes the bus into the CBD each day rather than drive. Photo / Doug Sherring

However his wife used to work at Middlemore Hospital and would have to drive to and from work because there wasn't a public transport service between the two.

"It took her an hour and a half and, with the petrol prices the way they are today, they'd kill her, that'd be another $200 a week?"

The current cost of electric vehicles had put him off buying one for now, he said.

And Meharry said his family was fortunate not to have to worry "too much" about the petrol tax diving into other costs they spend around the home.

"Like a lot of people, we'll just absorb it [the tax] ... we don't necessarily feel the pain that potentially others are feeling.

"It's irritating when you drive past a petrol pump," he said. 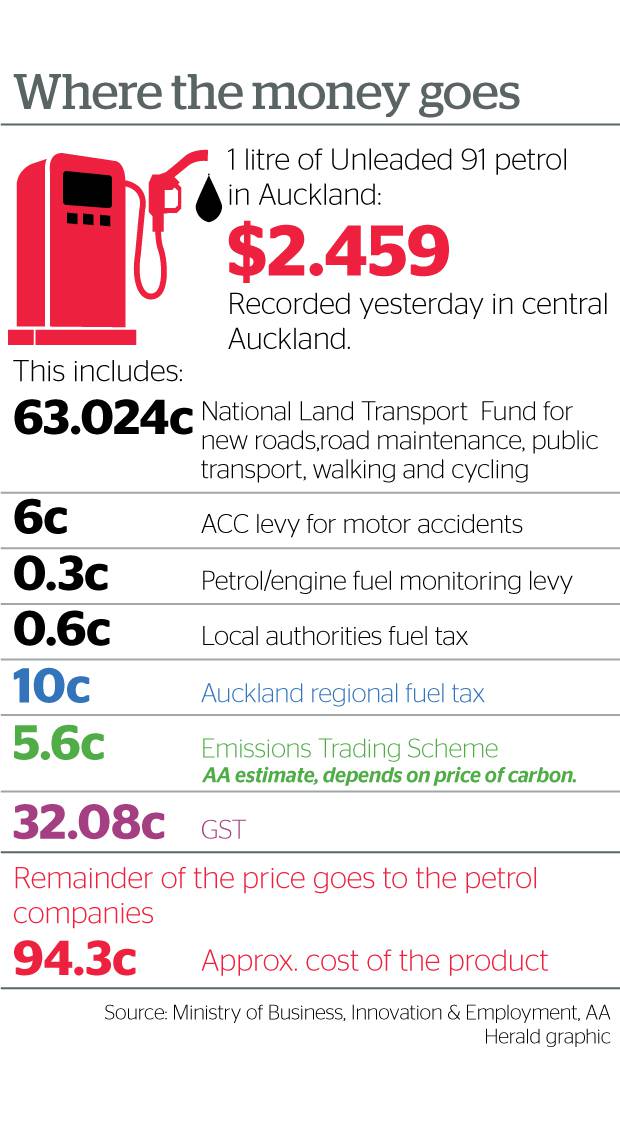 National Leader Simon Bridges has been critical of the Government and its fuel taxes which he said is pushing the price of petrol up.

"Unlike petrol, talk is cheap. And the Government is a big part of the reason why petrol prices are so high."

Petrol prices are creeping up to $2.50 in some parts of the county.

Ardern came out swinging on Monday, pointing the finger at fuel importers – such as Z Energy, BP, Mobil and Gull – and their margins.

"Between 2008 and 2017, the margins importers were taking for themselves more than doubled from 7 to 16 per cent.

"That increase represents a transfer of wealth from petrol consumers to producers, to the tune of hundreds of millions of dollars a year."

Between October 2017 and September this year, petrol prices have risen 39c – Ardern said just 6.8c of this was tax.

But 9.8c of that was down to the margin from importers, she said.

"I do not see that as acceptable."

Given the concerns about "anti-competitive behaviour" in the fuel market, the Government has prioritised the passing of the Commerce Amendment Bill.

This bill would amend the Commerce Act to enable the Commission to undertake market studies.

Once passed, Energy Minister Woods has signalled that she intends to ask the Minister of Commerce and Consumer Affairs Kris Faafoi to request the Commission to conduct a market study into fuel markets to better understand how the market is functioning.

"I will nominate the fuel markets as a priory area," Ardern said.

Ardern is anticipating the bill to be passed in two weeks' time.

The study will report back next year, and the Government will prioritise a response to what the Commerce Commission finds.

In the past, some petrol companies have not played ball with the Government when asked about their margins.

"That is why we are passing legislation that will allow us to take a full market study, and will require full market co-operation," Ardern said.

"They haven't opened up their books to us in the past; so we're going to have to force their hand."

Bridges said the Government should axe its fuel tax increases to provide immediate relief to motorists.

"[Ardern] is saying consumers are being 'fleeced' while her Government is driving up fuel prices and taking hundreds of dollars from Kiwi households through higher taxes on fuel.

"The [Commerce Commission] inquiry will take months and any resulting changes could be years away. Meanwhile New Zealanders are paying record prices for petrol and the Government is collecting hundreds of millions of extra tax [dollars] from them."

But Ardern said the Government's exercise tax has been just a "small part" of the petrol price increase.

"Even if we did remove [the exercise taxes] I cannot guarantee that fuel companies would not simply absorb that themselves and consumers would pay the same price."