A pregnant woman and her partner narrowly escaped their smoking car before it burst into flames.

The Pahiatua couple had been on their way to work in Masterton on Monday morning when they heard a "pop" from underneath the bonnet.

"Next minute, she's in full flames", the man said.

"We had enough time to get out, that was it."

The couple, who did not want to be named, had pulled over on State Highway 2 near Mount Bruce after 6am when they heard the noise and saw smoke rise from the bonnet.

The man's partner, who is almost six months pregnant, said she believed if they had taken any longer to get out of the burning vehicle, they would have died.

"It was really scary because when we pulled over, we only had two seconds to get out," she said.

"The whole interior was just blacked out with smoke. I couldn't believe how fast it came through.

"If we didn't get out when we did, we wouldn't have survived. There's no way.
"We'd be dead before the fire hit us."

Masterton firefighters were at the scene for about half an hour. Photo/Wairarapa Times-Age

A New Zealand Post truck pulled over behind them to assist.

"The Post truck stopped behind us and we asked if he had a fire extinguisher and he searched but someone had taken it out," the man said.

"By then, it was too late though. [The fire] went up that fast."

The couple had no choice but to wait for the Masterton Fire Service to arrive to put out the blaze. One fire truck was sent out, and was at the scene for about half an hour.

Masterton Fire Station Officer Garry Nielsen said there had been a mechanical malfunction in the car, resulting in it catching fire.

The mechanical failure had created an oil slick on the road before the vehicle pulling over, so roading contractors Fulton Hogan were called to clean up the road, he said. 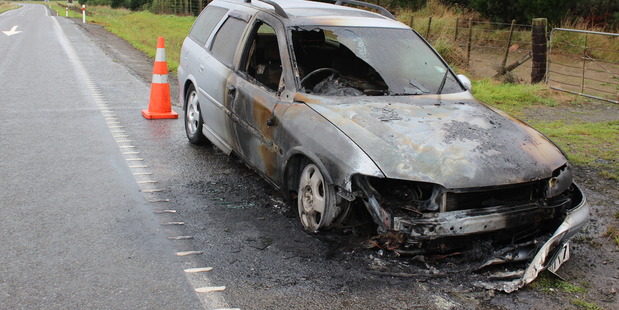 The couple had pulled over on State Highway 2 near Mount Bruce after 6am when they heard a noise and saw smoke rise from the bonnet. Photo/Wairarapa Times-Age

The couple had bought their Opel Vectra station wagon on the weekend in a private sale and had not yet insured it.

"We have another car at home, but it's a convertible that leaks," the woman said.

"Because it was raining, we thought [the station wagon] would be the best option, but um, I'd rather get wet."

She said from now on she would carry a fire extinguisher in the car, "just in case".