Tyres of more than 20 parked cars slashed on Auckland street

Police on the North Shore are investigating after several residents woke to find the tyres on their vehicles slashed.

One street in Birkdale, Tiri Tiri Rd, has had tyres slashed on nearly every car parked from the bottom to the top of the street.

In a video posted by a local on the website Reddit, up to 13 cars are seen with flattened tyres.

The man taking the footage - showing vehicles parked on both sides of the road - can be heard at one point saying: "It's really interesting.'' 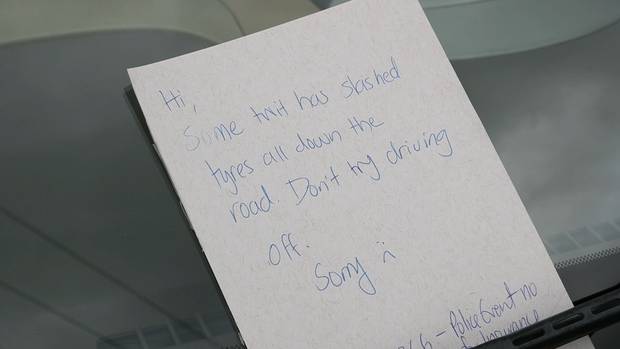 A note left after more than 10 cars had their tyres slashed on one North Shore street.

As he passes a couple of guys seemingly accessing the damage to their car, one is overheard saying to the other: "Oh, pretty rat s***, aye!''

Near the end of the video, a red car can be seen being hoisted; ready to be towed away.

Police said this afternoon that officers were investigating after reports of damage to more than 20 vehicles in the Birkdale area, including nearby Woodhams St, overnight.

Authorities are carrying out forensic and scene examinations and appealing to anyone with information to make contact immediately.

"Police encourage anyone who has sustained damage [to] their vehicle to report it to police if you have not already done so.''

An appeal is also being made to any residents or business owners in the area who may have relevant CCTV footage that may help in their investigations. 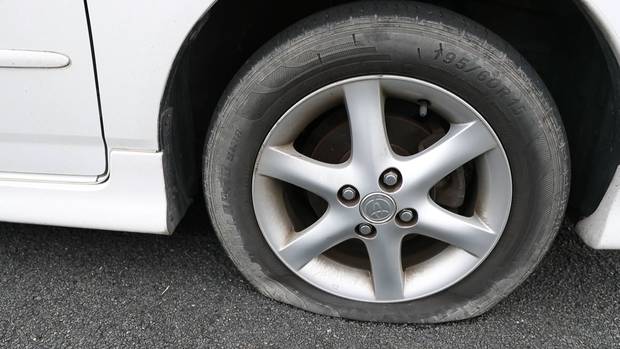 A number of residents have reported on a community Facebook page that the damaged vehicles include those that were parked in private driveways as well as on side streets and neighbouring roads.

Many have labelled the actions as disgusting; saying the damage overall would be thousands of dollars' worth.

"This is absolutely disgusting!

"Completely mindless vandalism and not what the area is about.''