A motorist stuck behind two cyclists on a narrow West Auckland road has blasted the riders for their rude and "entitled" behaviour.

Last month motorist Pieter Kruger was driving home to Piha on West Coast Rd when he came up behind two cyclists riding side-by-side, taking up more half of the narrow road and making it impossible to safely pass.

Kruger, a cyclist himself, said he was disgusted at the riders' lack of consideration for other motorists, especially on narrow and dangerous roads.

The Piha resident said was stuck behind the two chatting cyclists for more than 20 seconds, revving his engine in an attempt to let them know he was behind them. 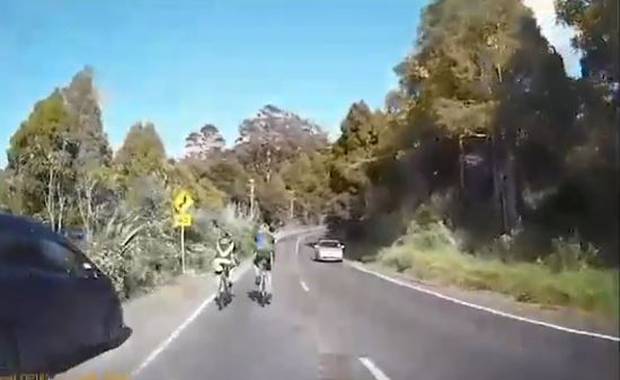 A motorist stuck behind two cyclists on a narrow West Auckland road has blasted the riders for their rude and "entitled" behaviour. Photo / Supplied

But they didn't move, leading to Kruger yelling out "come on guys, single file" as he drove past when there was safe space to pass.

Kruger told the Herald the video shows just one of many issues he faces with ignorant cyclists every weekend.

"This is what is happening every weekend in the Waitaks on the roads, West Coast, Scenic, Piha Road. I am a cyclist myself and this is not on." 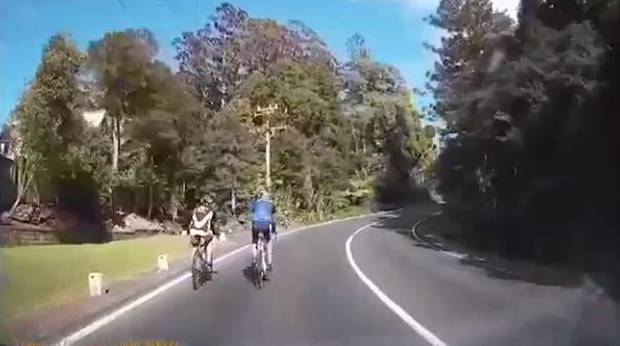 Kruger revved his engine and had a word out his window, but they cyclists refused to move. Photo / Supplied

Kruger said the cyclists, who were busy chatting away, were "rude", "careless" and had a "sense of entitlement".

West Coast Rd, which has a 70km/h speed limit, is considered a dangerous stretch of road because of its narrow and windy corners.

The surrounding trees block light on the road, often making it difficult to see cyclists.

Kruger told Stuff that the two cyclists "give others a bad name" and labelled them "a bunch of bad apples".

The Piha resident believes other motorists wouldn't have been as patient as him and hopes his video will serve as a warning to cyclists to be more respectful on our roads.