A South Canterbury farmer's wife and mother of one, Janet Meikle, was the first person in New Zealand to be killed in an accident caused directly by a car.

The driver, she died in September 1906 when returning with her husband John to the farm, Table Downs, at the head of Washdyke Valley. They had gone to Timaru, about 8km away, for a Saturday afternoon.

Janet, aged 36 and the mother of a 4-year-old girl, was an experienced motorist. She had been driving for about two years. New Zealand had had cars for only about seven years. 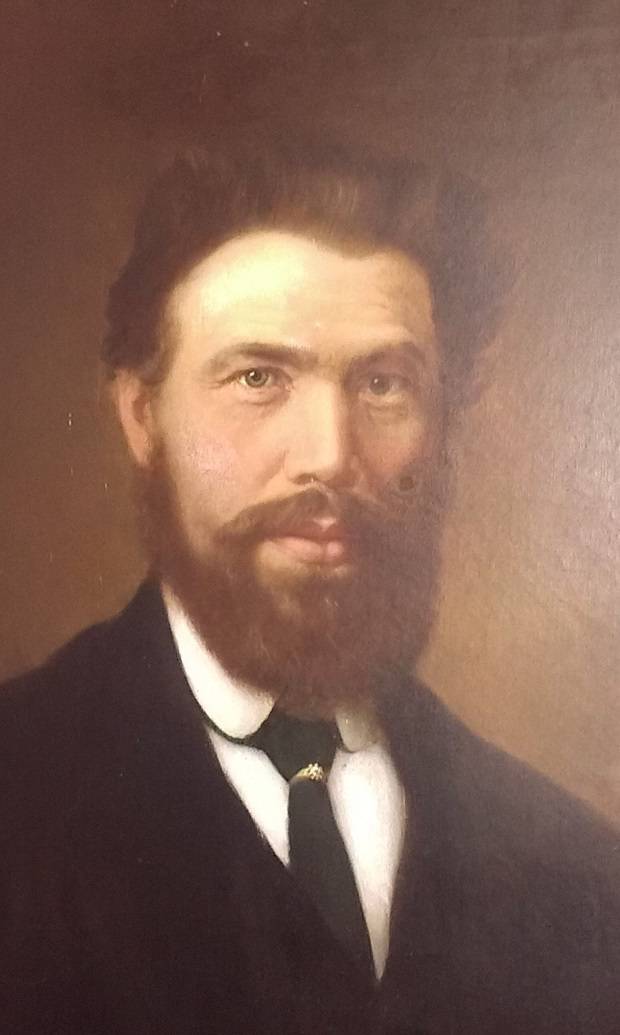 A painting of John Meikle, who suffered a broken leg in the car crash on his farm near Timaru in South Canterbury.

The couple arrived home in the 8 horsepower De Dion car about 4pm and were on the farm's driveway when the accident happened. Descending a steep, narrow cutting on the side of a spur, the car swerved inwards at an awkward bend. Janet over-corrected slightly with the steering and the vehicle left the track. It ran a short way down the side of the spur and broke a fence post as it tipped over the fence into a paddock.

As the car capsized, John was thrown clear, but the side of the vehicle fell on Janet's lower chest and pinned her tight.

With a broken upper leg, John crawled towards their house until a servant, Grace Robertson, heard his cries for help. She came and with a spade tried to dig beneath Janet to relieve the pressure, but the car kept slipping down too.

Grace ran for another worker, who was ploughing about 1.5km away. He brought horses and rope and pulled the car off Janet, but it was too late. She had suffocated. 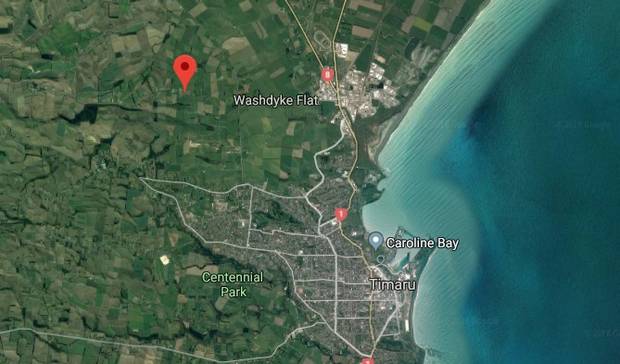 The Meikles' fatal car crash happened at their farm on Spur Rd, northwest of Timaru near the red map marker. Map / Google

John was an entrepreneur who appears to have started out with little.

"He arrived in New Zealand from Scotland with only a sovereign to his name [worth about $200 today]," says a grandson Bruce Meikle.

John may have been involved in gold mining, and was certainly a coach driver, proprietor of Timaru's Grosvenor Hotel and invested in farms.

His first wife had died. Some time after Janet's death, he married Grace Robertson - with whom he had a son - and lived to the age of 82. 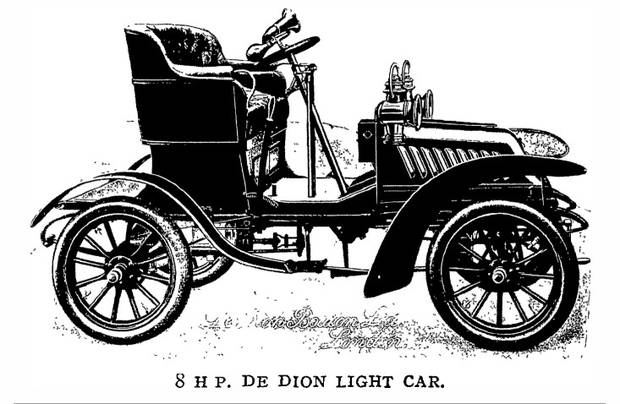 Janet Meikle died when she was pinned beneath the 8 horsepower De Dion Bouton car she was driving home to a farm near Timaru. Photo / National Library

The fate of the car that killed Janet Meikle isn't clear. A De Dion was one of the first pair of cars to be driven to Mt Cook village, in February 1906, and it has been displayed at the Sir Edmund Hillary Alpine museum there. Some believe it became the Meikles' car after its historic journey.

• 1902 - Claude Smith died when thrown from a trap whose horse was startled by an oncoming car in Christchurch.

• 1905 - Alfred Price was the first in New Zealand to die in a motorcycle crash. The rider, he was killed by a late-night incident involving a train in Dunedin. He fell from his motorbike, but it wasn't clear if there had been a collision.

• 1905 - Mrs Winsloe, 45, was the first car occupant in New Zealand to die in a crash. A car passenger in Gore's main street, she died soon after the car and a horse-and-trap collided. The horse shied when the trap rattled over a culvert and a protruding harness shaft hit Winsloe. The trap driver, John Whittingham, had a charge of manslaughter against him dismissed before it went to a jury trial.

• 1906 - George de Montalk, one of four passengers in a swerving Wolsley car, was killed by its collision with a night-soil cart in Christchurch. The group had been out for a long night of drinking "shandies" at hotels between the city and Prebbleton, a court heard. The driver, William Thomas Fenton, was acquitted of a manslaughter charge.

• 1906 - Amy Kensington was hit and killed by a fire engine on a central Wellington street and one of her daughters was injured. Amy's husband, Under-Secretary of Lands William Kensington, witnessed the immediate aftermath of the accident by looking out a window of his government building.

William McLean of Wellington imported the first cars to New Zealand, two Benz vehicles from Paris, in 1898. In the same year and on his application, Parliament legalised the operation of motor vehicles through the McLean Motor Car Act. The first car imported to Auckland was a Star model from Britain in 1900. Several other people had built car-like vehicles. 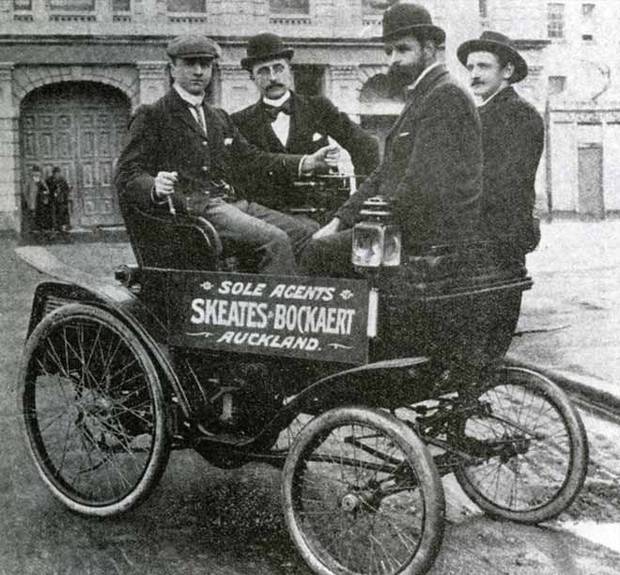 The first car was imported to Auckland in 1900. A Star, made in Britain, it was the third car imported into New Zealand.

Motoring historian John McCrystal says the De Dion Bouton 8 was probably the most popular car in New Zealand in 1905. Cars were for the wealthy, and with low numbers - he estimates there were fewer than 1000 cars in the country by 1909 - fatalities were sporadic.

But with the arrival of the Model T Ford - the first was produced in the United States in 1908 - cars became established and as motoring grew, so did road deaths. National statistics are available from 1921 - there were 69 deaths that year - and the tally began to rise rapidly from 1923.

Our worst year was 1973, when 843 people died, and the population then was smaller than now. The per-capita road toll was more than four times higher in 1973 than in 2011.

At that time the crack-down on drink-driving was fairly new and in the years since, use of special seats by children under 7 and seatbelts by everyone else gradually became mandatory.

Car safety has improved radically in the average car since the 1970s, with the introduction of air-bags, anti-lock braking systems and, in newer models, the increasing use of cameras and other monitoring devices to help prevent crashes and keep the vehicle safe. 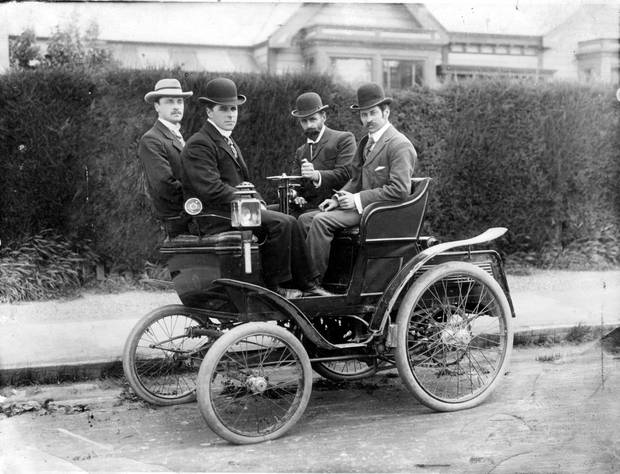 The first motor car imported to Auckland was a one-cylinder belt-driven Star, from England in September 1900.

The earliest cars were slow by comparison with today's vehicles, but they also had few safety features - there were no seatbelts, only rudimentary brakes and with no roof or walls the occupants were likely to be thrown out in a collision.

Cars needed to be registered and licensed from 1905 and McCrystal says this arose from outrage over "furious driving" and the desire to track down the drivers.

Perhaps surprisingly, McCrystal found that in the age when women had just won the vote, woman drivers were not uncommon.

"Probably as many if not more women did the driving up till the 1940s because they tended to be the ones who went from the farm to town. Cars weren't much used on the farm till the 40s."