20/12/2013
Search Driven for Lamborghini for sale
Looking for a deal on this vehicle? Chat to us now
Start Live Chat

New images of Lamborgini's Gallardo replacement have been leaked online.

While the images have yet to be verified by Lamborghini, the car, likely to be called 'Huracan,' is very similar to the camoflauged car we have seen in recent spy shots. 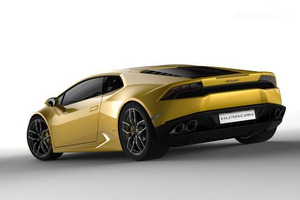 The Huracan should retain the same silhouette as the out-going Gallardo and feature styling cues resembling the Aventador and the hard-core Sesto Elemento, including quad exhausts, hexagonal intakes and a 'flying buttress' C-pillar. The interior will follow a similar layout to the Aventador, including the flip-up starter button.

Reports indicate the new car will feature an enhanced version of the 5.2-litre V10 from the Gallardo. Power is expected to be in excess of 450kW with a new seven-speed dual clutch transmission replacing the old E-Gear system. Zero to 100km/h should take a little over three seconds. We do know the Huracan will share its platform with the new Audi R8 due in 2015.

The Gallardo was released in 2003, with over 14,000 units being produced, making it the most successful model in Lamborghini's history. The company are expected to release more details of the Huracan just before Christmas, with an official unveiling planned for early 2014.