By Ben Selby • 15/02/2014
Search Driven for Mini for sale
Looking for a deal on this vehicle? Chat to us now
Start Live Chat

Few cars have captured the world's imagination like the Mini since its inception in the late 1950s - most of us either owned one or knew someone who drove the revolutionary little four-seater.

OriginsProduced by the British Motor Corporation (BMC), the Mini was the brainchild of Alec Issigonis, the man responsible foranother icon, the Morris Minor.

The Mini was the first car to feature a transverse-mounted engine. At 850cc, it wasn't fast, but space and brilliant handling meant it set the template for all future front-wheel-drive hatchbacks. Inside, you had a steering wheel, gear lever, speedometer with fuel gauge and that was about it.

When launched in 1959, the Mini (sold as the Austin Seven or Morris Mini Minor) received mixed impressions from the public at first. They then drove it, loved it, and an icon was born. 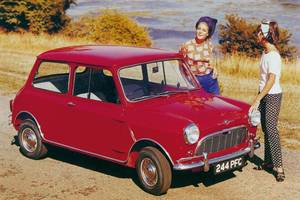 The Mini's first decade of production saw the car become a part of the swinging scene. The Mini's handling and lightness meant it was a weapon in motorsport, thanks to F1 team owner John Cooper.

The first Cooper-worked Minis packed a 998cc engine with 41kW, a close ratio gearbox and disc brakes up front, unheard of in a small car at that time. Racing drivers loved them - even Enzo Ferrari was a fan.

The Mini Countryman and Traveller were wagon variants aimed at buyers who wanted more room. With an extended rear for lugging things around, they proved popular with young families and tradesmen. The Mini Mk2 was introduced in 1968. The car now had rectangular tail lights and a re-designed grill.

In 1969, the Mini Clubman was launched with headlights recessed in the front grill, new bumpers and a restyled instrument cluster. The Mini's big-screen debut in Peter Collinson's The Italian Job was another highlight.

As the fuel-starved disco era dawned, the Mini was gripped by the colossus of British Leyland (BL). A number of celebrities, including model Twiggy and comedian Spike Milligan, starred in Mini ads to keep the punters keen.

The most 1970s-esque Mini was the Clubman 1275 GT. Available in many colours, including tasteful brown, a 1100cc engine meant the GT was the hottest Mini of its era. 1980sDuring the 1980s, the Mini still soldiered on. The original Clubman bit the dust in 1980 and the car was now badged as Austin Mini. Limited-edition specials - including Red Hot and Jet Black - sold well.

The ERA Mini Turbo, billed as the spiritual successor to the Cooper and 1275 GT, was a modified Mini City with a 70kW turbocharged 1.3-litre version of the regular Mini engine.

Under the Rover name, the Mini was still popular. Starring in the British TV comedy series Mr Bean further cemented its cult status.

Just short of the brand's 40th birthday, the last of the original Coopers was being produced. An uprated 1.3-litre engine, bright colours, spotlights and extra creature comforts made for a good package in the eyes of buyers.

By 1999, more than five million Minis had been produced but production under Rover wound up.

BMW Group takes over production of the Mini and at the 1999 Paris motor show, an all-new Mini was launched.

The BMW Mini was given an overload of automotive steroids. Bigger, heavier and with features like CD player, air con and traction control.It was a huge seller.

The base-spec Mini One, followed by the Cooper and supercharged Cooper S, completed the initial range. Providing grunt was a 1.6-litre four cylinder putting out 88kW and 160Nm of torque.

Thanks to supercharging, buyers got 129kW in the Cooper S, while the Mini One had 70kW and a 1.4-litre four cylinder. A diesel was offered later in the production run while later convertibles and Clubman variants proved popular.

The second generation BMW car was shown in 2006, which saw the John Cooper Works programme become part of Mini. 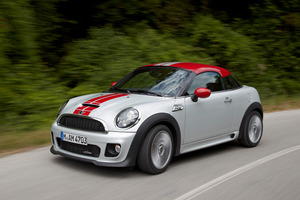 The current decade has brought us even more from Mini. The first was the four-wheel-drive, five-door Countryman, followed by the two-seater Coupe, Roadster and larger Paceman.

With the recent launch of the third-generation car at last year's LA auto show, the Mini's appeal shows little sign of slowing down.

To celebrate the launch of the third-generation Mini we have a prize pack to giveaway. Contained in the Mini bag are tee-shirts, pens, stationary, books, stickers, a hat and your car, well a small model version of gen two Mini. Like DrivenNZ on Facebook and share the Mini Prizepack