By David Zalstein, CarAdvice.com.au • 16/02/2016
Search Driven for Ferrari for sale
Looking for a deal on this vehicle? Chat to us now
Start Live Chat

Being invited to drive one of the world’s most famous circuits is a privilege few people get. Getting to experience it in the most powerful currently-available Ferrari on sale in Australia – the 2016 Ferrari F12 Berlinetta – is something else entirely.

Having made the trek from Sydney to Mount Panorama in a horde of 28 various Ferrari models, we spend the morning completing a driver’s briefing and maximum 60km/h sighting lap of the hallowed 6.213-kilometre Bathurst circuit. Our limited ‘at-speed’ laps will have to wait for the afternoon…

Home to the Bathurst 1000 and Bathurst 12 Hour, Australia’s Mount Panorama circuit is not only one of the world’s most famous racetracks, but with a 1.916-kilometre back straight – Conrod Straight – it’s also one of the fastest.

Given the GT3 cars racing at this year’s Bathurst 12 Hour reached around 285km/h down ‘Conrod’ – V8 Supercars tip closer to 295km/h – the potential to go beyond 340km/h is comprehensively ridiculous for a road car with number plates, an automatic transmission and leather seats.

From the outside, the F12 hardly lacks presence. At 1942mm wide, the big-daddy Ferrari is wider than a $387,300 Porsche 911 GT3 RS and not far off the girth of the lane-hogging Lamborghini Aventador.

The F12’s sleek design is highlighted by its unique ‘aero bridge’ – which lovingly flows between the bonnet and front guards – an inverted bonnet vent and automated brake cooling ducts – the latter opening when the car deems additional cooling functionality is required.

At the rear, small, black, guard-top vents – allowing hot air to be expelled from the engine – are joined by four exhaust tips. There are also two gorgeous lines that not only partner with the F12’s rear spoiler to frame the backend, but ooze down to house an F1-style rain/fog light and become part of the flat-out sexy venturi. In short, if you haven’t spent time staring at the rear-end of a Ferrari F12, do so. 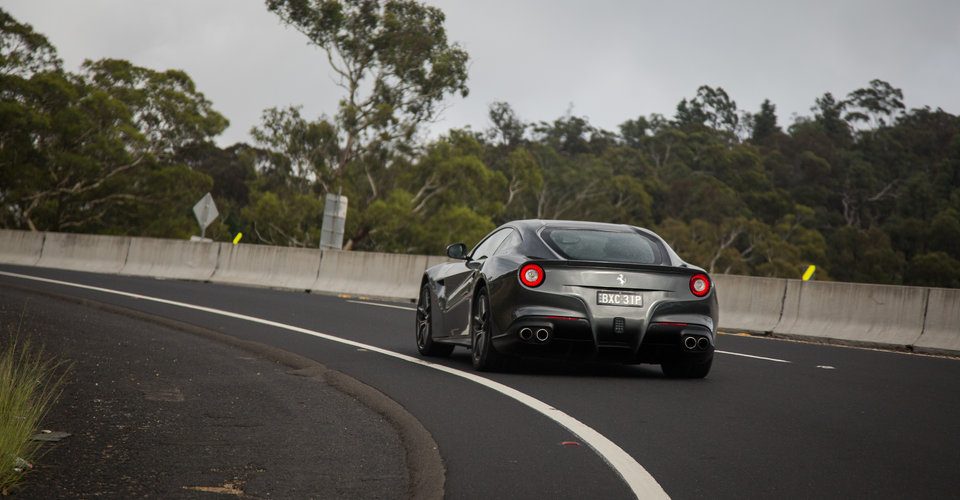 With the temperature climbing to 32 degrees Celsius and the morning’s driver briefing and ‘practice’ lap now a distant memory, we lid up and roll out onto Mount Panorama’s main straight, ready to tackle ‘The Mountain’ in convoy with a variety of horse-stamped metal – the whole situation feeling completely surreal.

Where our road drive of the F12 saw us switching between ‘Wet’ and ‘Sport’ on the steering wheel-mounted Manettino dial, the little red indicator is now pointing to ‘Race’ mode. This means the adjustable magnetorhreological suspension, speed sensitive electrically-assisted power steering and E-Diff3 electronic differential are all geared to track, rather than road driving.

Selecting second gear and tipping in to Hell Corner, or Turn One, at 87km/h, we gently roll back onto the throttle, and the F12 immediately imparts a feeling of vast competency and equally vast power.

The 515kW/690Nm 6.5-litre V12 tucked into the rear of the LamborghiniAventador might be a more raucous unit than the marginally smaller capacity Ferrari powerhouse, but the sweet sounding motivating force from Maranello is simply immense. Immense and smooth.

Maintaining a ‘safe’ distance to the 458 in front of us, we easily brush 184km/h as the car gets light over a hump about halfway down the 1.111-kilometre Mountain Straight. In front of us, a train of Prancing Horses snake its way through The Cutting and out of Reid Park – quite the sight, and sound.

Coming out of McPhillamy Park and into Brock’s Skyline at 124km/h, we’re concentrating hard on looking ahead, rather than looking at the incredible view out to our left. Annoyingly for drivers, the scenery surrounding Mount Panorama is painfully stunning.

The group slows to around 50-60km/h through The Esses and The Dipper – understandable given the majority of cars we’re sharing the track with are owner/operators in their pride and joys – but excitement is still sky high coming into and around Forrest’s Elbow.

The end of Forrest’s Elbow signals the beginning of the almost two-kilometre Conrod Straight, providing us with our first real opportunity to give the F12 full throttle. And does it deliver… ‘Coasting’ down Conrod at around 170km/h, the car feels super stable, even over the back-straight hump just before you reach the overhead Pirelli sign.

We approach The Chase at a ‘gentle’ 188km/h, and are amazed at the F12’s relatively light steering – heavier in Race and Sport mode than Wet – and impressive agility. Sure, it’s a Ferrari, but the Berlinetta is still a big, comfy GT car weighing 1630kg.

Turning right out of ‘The Chase’, we cruise down the hill towards Murrays Corner making a little noise for the lucky people staying at the Rydges Bathurst – the closest track-side accommodation next to camping inside the circuit. We tip in left at 83km/h and we’re onto the main straight again.

From 64km/h, we floor it and hit 174km/h less than seven seconds later. This thing is properly brisk.

Beginning to come to terms with just how casual the F12 is about its ability to be face-meltingly fast, we start to focus on other aspects of the car.

The paddle-shifted seven-speed dual-clutch transmission slams through ratio changes at a serious rate of knots, even if they’re not quite as instantaneous as those in the latest crop of McLarensupercars.

As we squeeze the pace on a little more, so do the other drivers. But despite going a fraction quicker and making a touch more noise – and sliding around in the seat a little more than we’d like – the car feels like we’re asking a mere three tenths of its full potential. It’s so composed, so under control, so contented doing what we’re asking of it, it feels bored with us driving it. Up through Griffins Bend at around 90km/h and the F12’s progressive turn in teams exceptionally well with solid rear-end corner-exit grip – far more than we were expecting – from the standard 315mm-wide Pirelli P Zero tyres. The combination builds confidence, which results in the building of speed.

Slowing for traffic again through The Cutting, we get enough room coming through Reid Park for a heavy throttle application, rocketing from 68km/h to 127km/h in the blink of an eye, without so much as a hint of rear-end slide.

Although the F12 makes its 545kW peak power figure at 8250rpm and 690Nm peak torque figure at 6000rpm, you hardly need to go chasing the engine’s 8700rpm rev limit to get the thing to hustle. Even relatively tame prods of the throttle have the digital speedo working hard to find the next number to display.

We tip into McPhillamy Park at 110km/h and hit 140km/h before the approach into Brock’s Skyline.

Back down through The Esses towards Forrest’s Elbow, our fellow drivers take it nice and easy, until they reach the start of Conrod once more. This time we have a slightly larger gap to the cars in front, and quickly make use of it. Quickly being the operative word…

We grab first gear and plant the foot at 45km/h. With the F12’s simply monstrous powerplant wailing away, the numbers fly by. Second gear violently goes through at around 78km/h, third gear at around 109km/h, and in our third and final lap, we wind the F12 out to 243km/h in fifth gear before we lift well ahead of the Conrod Straight hump and the Pirelli sign – the car doesn’t need us to but the traffic in front requires that we do so.

We roll into The Chase for the final time at around 160km/h and do our best to savour our last few moments on one of the greatest, most challenging racetracks on the face of the planet.

And that’s it. We’re done, and the drive is over.

The 2016 Ferrari F12 Berlinetta is not a car many people will ever be able to afford, or have the opportunity to own or even drive. But it does what it’s built to do, astonishingly well. And it absolutely epitomises the very thing Ferraris are all about; the very reason you buy a Ferrari over any other supercar. It stupendously blends high-end luxury with eye-watering performance. As if the even faster limited edition F12 tdf’s extra 29kW and 15Nm were needed… Driving a Ferrari F12 Berlinetta around Bathurst: truly a once in a lifetime experience.
Want to test drive this vehicle? Chat to us now
Start Live Chat
By David Zalstein, CarAdvice.com.au • 16/02/2016