Commodore replacement may have special insignia

By Liz Dobson • 18/10/2014
Search Driven for Holden Opel for sale
Looking for a deal on this vehicle? Chat to us now
Start Live Chat

Ever since Holden New Zealand's managing director, Jeff Murray, said local dealers had seen the Commodore replacement, rumours were rife about what model that would be.

With production of the sedan ceasing in Australia by 2017, the General Motors-owned company needed to replace the vehicle from within its portfolio. While Holden won't be making an announcement any time soon, the main contender has to be the Opel Insignia.

It will be one of three Opel vehicles arriving here next year after it was announced at the recent Paris motor show that a third of Holden NZ and Australia's line-up will be from GM's German brand.

Holden Australia is still discussing whether the replacement will be badged Commodore but, in the meantime, there is the Insignia.

Just days after the motor show, Driven was in Britain with Holden NZ and Australia, driving the three products - the Insignia, Cascada convertible and Astra hatchback in two variants, the GTC and VXR.

The VXR brand is Opel and GM's British brand Vauxhall's version of HSV.

When the cars arrive here, they will be still be badged VXR while the HSV brand will also continue. Holden NZ is bringing in the Opel Cascada convertible (right)and the Astra VXR (front) and Insignia (rear) next year.


While Opel used the Paris motor show to unveil the new Corsa, and there are no plans to import the three-door hatchback here as yet, it may eventually replace the Barina as the small hatch in Holden's line-up.

But GM did reaffirm in Paris the importance of the Australasian market for the car company.

GM Europe president Karl-Thomas Neumann said at the motor show that "the Australian [and New Zealand] market and Holden brand is important for General Motors".

He added: "One of the responsibilities of Opel is now to supply certain models."
Kiwi Dan Ammann is GM's president, based in Detroit, and he told Driven that the company would be using Holden Australia's Lang Lang Proving Ground to calibrate the Opel products for local conditions.

That included focusing on suspension settings for our rougher bitumen roads and tougher driving conditions than the UK or Europe.

Ammann also acknowledged that General Motors had to work on its brand after the announcement that Australian production would cease in 2017.

"As a company we haven't done a good job about being systemic, we're going to be more expansive moving forward," he said.

"In hindsight, the strength of Commodore may have taken the focus off the rest of the portfolio in the marketplace. The Insignia will come to NZ and be badged Holden. Photo / Liz Dobson

"GM is a big company that has come a long way in recent years. My job is to help keep the machine running. And we'll do it, too - we are busy developing a portfolio that will bring customers the best of GM product from around the world."

Neumann also agreed that the Opel products needed to be modified for the Australasian market.

"There's also lots of appreciation [from Holden] for a sporty car which drives well with a sporty engine," he said.

"We will really work intensively with Holden to understand what makes the brand, what modifications we will make. We want these cars to be true Holdens."

No New Zealand prices have been announced for the Insignia, Astra or Cascada but the three products were sold in Australia under the Opel brand from 2012 for just a year, ceasing operations in August 2013.

A Holden Australia spokesman suggested that the prices would be similar to what they were then - the Opel Astra was priced from A$23,990.

Driven tested the Astra during the British drive programme after Paris. With the drive programme incorporating motorway routes, urban roads and country lanes in sunny and horribly wet conditions, it was a great two-day test of the vehicles.

To show off the sport performance of the Astra VXR, we spent a morning at the Rockingham track at Corby, Northamptonshire. While the three-door hatches, powered by a 2-litre, turbo direct-injection engine, producing 400Nm of torque were eager to please, the heavy rain meant the track had surface flooding, giving the 20in tyres a workout.

On the road though, the vehicle was a star, although the three-door, six-speed manual will find tough competition once it lands in New Zealand from the likes of the Ford Fiesta ST and Volkswagen's Golf GTi. 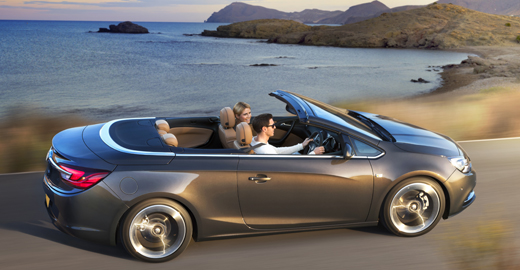 With standard features including a dual layered fabric roof, 18in alloys and wheel-mounted audio controls, the soft-top is a striking-looking vehicle.

Our test vehicle had the optional specs of premium leather seats (a box I'd tick if I bought one) plus Opel's flash satnav system.

The spec, size and performance of the car will see it up against the likes of Audi's A3 cabrio but, within a diminishing segment, it will be sure to find keen Kiwi buyers.

But the vehicle that will make the most impact - especially if the "new Commodore" rumour proves true - is the Insignia.

While we tested the VXR model with a 2.8-litre, V6 turbo engine and top knotch
Recaro sports seats, the look and handling of the car will see it fit snugly into the New Zealand market.

Holden Opel
For Sale on Driven